As far as sporting administration is concerned, Joe Robbins is one of the county’s most colourful characters but he is also the founder of a business that has withstood three recessions and a tech bubble.

In 1999, Joe co-founded CareerWise Recruitment but his five year stint as Chairperson of Clare Camogie this decade gave GAA followers a different view on the fashion style that can accompany an administrator. Those fortunate enough to attend County AGMs would have heard him quote figures such as John R. Wooden, Theodore Roosevelt and Pablo Picasso. 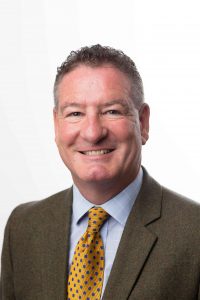 For this interview at the Shannon offices of CareerWise, Joe avoided referencing such individuals as he reflected on twenty years in business. Born in Clara, his youngest daughter Emma once told him he was the third most famous person from the Offaly town, behind Brian Cowen and Shane Lowry.

After graduating from UL with a business degree “a brain drain” which resulted in no jobs in Ireland forced Joe to emigrate. “I went to work in England for about seven years, I came back to Cork where my wife is from to set up an American multinational in 1991 then we transferred to Shannon in 1996 or 1997, they were transferring back to the UK in 1998 and they gave me an opportunity to move back which I wouldn’t do”.

This particular stage in his life led to the foundation of CareerWise. “I was working for a company at the time which had 120 people in Shannon, I started getting them jobs because I knew a lot of local companies, that was very successful because I got a lot of people jobs and I said to myself, I can do this and get paid for it. That’s why we set up CareerWise, we’ve gone from strength to strength, we’ve about 30 people now with offices in Cork, Galway, Shannon, Mayo and Dublin. We’ve survived three different recessions, a tech bubble. We never had any big plan, we wanted to add value, enjoy our lives and when we started we kept going, we kept things nice and tight, we’re really good at what we do because everybody comes with an ethical way of doing business, we’re very good with our clients, we’re respectful, knowledgeable so all of this gives us an edge on the opposition. We grew slowly and twenty years later we’re here, I’m hoping we’ll continue for another twenty years”.

“My background is in operations and general management, that is one of the key reasons we’ve been successful, we haven’t come from a sales background we have come from a technology background in the industry so we know. I’ve created companies, I’ve set them up, I’ve made people redundant and I was made redundant myself, I’ve been through every experience in life”.

Over the course of two decades, CareerWise has found employment for between 11,000 to 12,000 people. “Integrity and honesty is very important, if you do anything wrong or some kind of sharp practice it will come back to you in some shape or fashion. You’ve got to do your best, be honest, truthful, work hard, embrace the things that will give you an edge. People like to do business with people that they like and trust. Over twenty years, our company and me we’re very likeable, we do a really good job so people trust us. I might have placed a young engineer twenty years ago, that guy could be a General Manager now and he remembers how well we looked after him back then so when he has opportunities to hire people, he’ll come back to us. You can’t get in a few months what you’ve built up over twenty years in honesty, trust and loyalty”.

When the recruitment company began they used to post CVs to clients, that evolved to faxing and it is now done via email, “with technology now I can get a CV and email it to a client within ten seconds. Technology has enabled faster and quicker communication, we’ve embraced all of that, we also use the tools out there so we advertise on IrishJobs.ie, in newspapers, we’re into Instagram, Twitter, Facebook, we do blogging, we use LinkedIn very well it is the key tool for professional recruitment”.

Currently they are examining the potential of doing video CVs where prospective employees talk about themselves on video, clients can then judge based on a person’s articulation if they may be suited to their company. The screening method is all part of how they try deal with millennials. “Millennials won’t apply for a job, they expect someone to come looking for them, that is another reason why our business has changed, instead of putting an ad out there in a newspaper or Irish Jobs and hope you get a flood of people, you have to work much harder now, you have to go after the people because they are waiting for you to go after them”.

Intel, UTC Aerospace System, Zimmer Biomet, Tekelek, Microsemi and Dairygold are just some of the clients that choose CareerWise. The profession requires Joe and his staff to know what is going on in the area so they can best deal with these companies. He is positive when assessing the current employment trends in the Shannon region. “I don’t necessarily subscribe to the doom and gloom that is out there. The news on Molex is very sad, that is a given but if you look at the last ten years since the financial crisis I don’t think we’ve seen many companies close, we’ve seen a number grow and develop Zimmer Biomet is an example that has gone from 0 to nearly 500, there are others, Jaguar Land Rover has 350 people, the Aerospace and Aviation cluster.

“This region is growing and doing very well over the last few years, if you drive around the Shannon Free Zone you’ll see some flagship companies doing well, there’s a number of companies in Westpark doing very well, we’ve to keep a perspective on things. If you consider that American multinationals that come to Ireland, they are running out of space in Dublin, the rents in Dublin is very high, the cost of accommodation is very high, the cost of buildings is very high so they are migrating down here by default. A number of financial service companies are coming to Ireland and now to here,” he stated. “I’d be very encouraged, I think the Shannon Group are doing a fantastic job, Shannon Commercial Properties are bringing in new tenants all the time to the Shannon Region, we’re hearing the casualties we’re not celebrating the success of the companies”.

“If you’re living in this region, you could easily work in Limerick or Galway. I wouldn’t like to get parochial about Clare, put a big picture on and say the Mid-West, looking at that in the big scale of things it’s very easy to commute around, I’m positive by nature but I’ve saw the development in the Shannon Free Zone myself. If an American multinational was coming in tomorrow, there are businesses available in this region that could easily change and adapt to get up to speed quickly whereas if you’re building a greenfield site or looking for something in Dublin it takes far longer, Zimmer Biomet is an example, they went into a ready made building that they converted and they are up to speed”.

Married to Brenda who also works as the company’s financial controller, they have two daughters Katie an accountant and Emma a pastry chef at Adare Manor. It is often these three people he turns to in switching off from work. “I love my house, my family and sitting in front of the fire with a glass of wine watching golf on the television. I play golf, do a bit of walking and try keep fit”.

Once a week he’ll head to Shannon Golf Club for a round of golf usually to start the weekend, his handicap is now 12. During his five year tenure as Clare Camogie Chairperson he oversaw the development of Fr McNamara Park while as Chairman of the Oatfield fundraising committee he led the re-development of the local church.

Such achievements prompt The Clare Echo to query if Joe ever contemplated running for a seat on Clare County Council. It turns out, we’re not the first to have posed such a question to him. “One of my best friends in Sixmilebridge, Mike Morey and James Shanahan my neighbour up the road, they’ve often said to me you should get involved in local politics. Being Chairperson of Clare Camogie for five years, being involved with the business because it has to be hands on, once you take your eyes off something it could go horribly wrong very quickly, it’s something I haven’t really considered at this point. I’m really focused on my business because I have to be, I have been really focused on adding value to the community, for now I’m very happy with all those things”.

So the title of Cllr Robbins may have to hold for now and instead Joe will continue to lead CareerWise while also appreciating time with family and friends, playing golf and supporting Clare camogie.